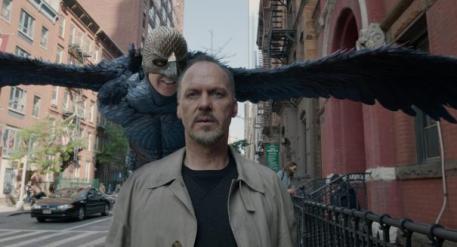 That’s not me talking. That’s what the great editor (great friend) Dov Hoenig said about  Birdman the other day, as his wife Zoe and I were trying to shorten the distance between London and Seattle over the phone.

My enthusiasms you can take with a giant grain of salt.  Dov’s you should take very very seriously.  The secret in the IMDb listing of his 40+ films, abroad and crucially with Michael Mann, is that it spans movies shot on film (Thief, Manhunter, Last of the Mohicans) and digitally (Heat, Collateral Damage) and he knows the virtues and frailties of both.  Never heard Dov — impassioned but also measured and serious — be this swept away before and this seems the time to share his fervor.

What particularly revved me up was seeing Birdman a second time last week. I’d forgotten just what a deckle-edge comedy it is, with all its soulfulness.  I think it’s a reflection of my inner Olive Kitteridge that I’ve held fast (for 3 months!) to not just popping in the screener so that my husband could see what I’ve been hyperventilating about, but insisting on a dark quiet theatre, so he could see it as it should be seen, in its full wonder.  Worked, too; he has come back to moments from it, again and again.

I wasn’t much help, have to say, when he asked what it was about, (his second favorite question after “What’s the running time?”) because it’s not about any two-sentence summary.  Fox Seachlight and New Regency are doing a full court press currently in Los Angeles, showing all of director Alejandro G. Inarritu’s films, with a section of “themes ” from Birdman added each night  (Risk, Respect, Love, Honesty, Truth.)

Well, okay, if you say so; I’d never disrespect the publicity arm that has brought this film to so many podiums and Best Of awards thus far. Still, highlighting themes does sort of tear up the — sorry, but there’s no better word —  soaring quality of the film. The camerawork of  Emmanuel Lubezki (Gravity) appears to be one pell-mell, hurtling, breathless single take, following Michael Keaton’s character, Riggan Thomson, indelibly stamped as the alter-ego of Birdman, a very dead franchise, as he dares to reclaim himself one last time — on Broadway.  (More about Keaton’s unsparing brilliance to come — as they say.)

I did like it Saturday night, when the beautiful Inarittu (below) won the Directors Guild  Award, and someone had to ask him flat-footedly What It All Means. Full of the moment, and translating from inside his head, the ebullient director answered,

“The actor as the representation of every human man who has a creative process. It’s about anyone with ambition, anything we feel; we try and fail, we question, we go deep then we rise up again.  I wanted Birdman to be an extension of that state of mind that every human being has [had] in his life, embodied in an actor.”

I think of all the awards this shimmering film has accumulated  — and the uber-reliable IMDb logs them at 139 won and 163 nominations, excluding its 9 at the Academy Awards* — the one that truly took me aback was winning Best Film from the Producers Guild.  Until I thought about that for a long minute.

Yes, of course that Guild could be considered the bastion of old Hollywood.  I don’t even want to look at the stats on its lily-whiteness or average age or how many women are members.  But Inarritu’s words stuck in my mind:  he made his beautiful film for anyone who has a creative process, who has ambition, who tries and fails, goes deep and rises up again.

How could it not have struck a chord with Hollywood’s producers — very possibly the biggest risk-takers in the business? .