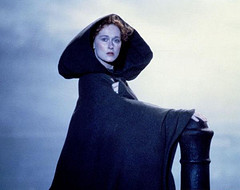 I was newly minted as the Los Angeles Times Critic when The French Lieutenant’s Woman opened to great fanfare in the fall of 1981.  I was still wildly conscious that the people who made these films, and knew them from the inside out, were reading what I wrote.  I also cared desperately for the film and worried that I hadn’t done it justice. (Truthfully, I almost never lose that feeling.)  So, when the Times’ uber Arts editor, Charles Champlin, said that its director, Karel Reisz, wanted very much to meet me, I was stunned.

I knew his history: Czech-born, he had been in the forefront of the British New Wave for years.  What was this about?  Complaints?  Mistakes?  Omissions?  No, simply a lovely, civilized lunch with the three of us at Michael’s (where, of course, I’d never been) with a director I revered.

Conversation and movie gossip began easily, Reisz was charm incarnate, and I almost unclenched.  Then, just as dessert arrived, he turned to me, pleasantly.

“Why did you say what you did about the music?”

“The music?”   (I froze.  Sweet leaping Jesus, what HAD I said about the music?)

“ You said the music near the end was like Verklaerte Nacht. . .”

Relief flooded through me.  If this was an exam, I had this one aced.  Schoenberg’s music was also used in the ballet Pillar of Fire, and if you saw its overheated sexual melodrama for the first time when you were 11, it’s unlikely that you’d ever forget it, either.  Or its music.

“Ohhhhhhh!  Well, when Jeremy Irons’ boat comes around the bend to find Meryl Streep.., the violins have that thrumming bit, you know. . .it goes. .. ”  I may even have whistled the thrumming bit, just to make my point.  “It’s really very like the Schoenberg . . . well, just very briefly.”    Mercifully, I held back Pillar of Fire.

Reisz studied me for a long minute.

“That’s very interesting. You know, we edit to temp music, and Verklaerte Nacht was what I had chosen.  I thought we had a spy in the editing room.”

My eyes must have been round marbles.  He went on:

“It’s fatal for the film composer ever to hear the temp, it always seeps through, one place or another.”

As we left, he put his arm through mine.  All I could think was, “‘A spy in the editing room”… So that’s how a director’s mind works. A great director.  Oh my, this job is going to be very . . . delicate.

Lord, what a joy it was to watch Meryl Streep at the Kennedy Center Honors.  She’s long since mastered the trick of being heaped with praise; she just comes out and says it’s not really the worst thing that ever happened and even suggests (slyly, smiling) that she may just have done something to deserve it. And she manages to make honesty seem funny and endearing and not in the least off-putting.

Two things jumped out as I watched the show: she’s the first honoree I can remember who was utterly engaged with her fellow tributees. Most of them sit, cocooned in their memories, rarely alert to what’s going on in the next chair. Streep was scanning Sonny Rollins’ face as he reacted (impassively)  to the goings-on; discreetly glancing at Barbara Cook to see how a parade of other singers having at Cook’s repertoire was going over (stonily.) And for quicksilver moments of fun, she and Yo-Yo Ma were like ping-pong partners, back and forth, during the night’s more raucous music.

Most of all she listened, and as she did, gave away one of the great secrets of her performances.  . For the Kennedy Center interview, she said,  “The real thing, that makes me so happy, is when I know I’ve said something for a soul.”

Acting isn’t, as it’s sometimes said, reacting, it’s listening  and as you watch Meryl Streep listen, to everyone and everything around her, with every sense engaged, you see her storing up bits and pieces, Chuck Close details, so when she’s finally ready, her “something” rings true.

This night, she threw in a little extra body English,. When they lit into Neil Diamond’s “Sweet Caroline” and the stage suddenly revealed a bleacher full of kids in Red Sox sweatshirts, her hands came up to the sides of her cheeks with pure surprise and her gold drop earrings swung wildly.

I would love to know if the Famous Five get to have any input about the work that’s chosen for their segments.  Ironweed  has sort of fallen by the wayside in the litany of her best work, a nearly criminal oversight, to my way of thinking.  Heaven knows the film had its problems, but there were none in  Streep’s Helen Archer.  (I’ll dig around and post an appreciation of Streep’s landmark early work, Ironweed included, shortly.)

So, my second surprise was seeing the set of Ironweed’s seedy bar appear onstage, to round out  Streep’s tribute. “She asked for Ironweed !“  I thought, blissfully, “She really really loves it.”  Ummm, maybe.  Mainly it was a chance to load up the stage with a clutch of loving co-stars and to bring the place down with everyone singing Helen Archer’s anthem:  “She’s Me Pal. “