I am happier to be doing this again than you can imagine.

Time to time, I get tagged with being, shall we say, a mite removed from How The Real World Works. It still amuses my husband to watch me at a soda machine trying to get WATER, which is mysteriously behind the Pepsi-thingie, and which I invariably cock-up.  “You were not born knowing  that,” I point out, defensively. .

You might also consider the act that cemented him forever in the hearts and minds of the two younger daughters.  (The eldest?  Oh, she introduced us.)  We have just had our  34th anniversary, but if you ask those two today for the moment this boy friend was absolutely home free as a serious contender, it would have been when he off-handedly took them to the Mill Valley McDonald’s.

Goggle-eyed, like a pair of Dickens’ starvlings, they took in the whole yellow and red wonderfulness. God only knows what they ate, but I know what they said:  “Don’t ever tell mom.”

“We’ve never been to McDonald’s.”

Yeah, yeah, yeah.  I’ve never had a Coke either.  What can I say — our paths just never crossed..

As he and I threw in together, I still made okay food, plus a few oddities from my mother’s Vassar-inflected repertoire: prune souffle, popovers. Meanwhile, he became a rampaging kitchen adventurer. His smoker — full of everything, anything — was only the beginning.  One Thanksgiving, after studying Julia like a medical student, he boned the turkey,  invisibly reassembled it, and cushioned it on the stuffing before it went into the oven.  Please do not ever tell him you have a large back yard; he’s been yearning to dig a fire pit and roast a whole pig for all the deprived years of our marriage.

(When I began writing this, I thought it was about a regular-type fella corrupted by long exposure to the rowdy irrepressible Irish. Standing back a bit, I see that we actually provided the backdrop and the excuse for someone whose tastes were impressively out of the mainstream from the get-go.)

Underpinning everything was my husband’s take on hospitality, which I discovered was more deeply Chinese than either one of us imagined. You thought the Italians invented Abbondanza!?   Marco Polo stole it from the Chinese, after a look at Kublai Khan’s fridges, groaning with leftover take-out.

Given its head, the Abbondanza philosophy goes way beyond gusto, beyond food/drink/music/lighting/more food/can I freshen your drink?  It’s also portal-to-portal nurturing, and my husband does it as well as he does because you can’t catch him at it. Mostly, it creates a sense of companionship.

Fortunately, companionship was the cornerstone of how a motley handful of Americans found themselves in the French countryside on September 11th. Some time in early 2001, our remarkable and enduring friend Milt Moscowitz invited a mix of family plus old and older friends to a remote and glorious French chateau — largesse from his Japanese businessman-friend who’d just had it renovated.  Milt’s offer was simple: you’re invited. All you have to do is get yourselves there.

We were the last pair to arrive, September 10th, driving south from Dijon into the Burgundy countryside until, finally,our headlights picked out the chateau’s creamy white outlines. The party was well begun. It wasn’t until the next day, after lunch in a nearby village that my husband found that he (or, ummm,  I, the passport-keeper) didn’t have his passport. We hustled back to the chateau.

I was up in our room, frantically shaking out every stitch we owned, when the chateau’s gatekeeper, in great distress, came to the heavy door, a small TV in his arms. All he could say was that something horrible had happened, “In your country.”.

The TV produced only snow and unintelligible sound. Calls to the States were hopelesly jammed. Without cable or internet, our only link to the world was the chateau’s phone line —- and its small home FAX machine.

We called the sole person we knew in France, Bob Swaim.  A permanent American transplant to Paris, a movie director with a bent for cutting edge technology, Bob was providentially perfect for this crisis. He began pumping wire service stories into our FAX machine — literal reams of them, piling up in uncut lengths on the floor.

The moment was surreal. In this exquisitely replicated blue and pink Provencal dining room, we grabbed sections, 8 feet, 10 feet, of unspooling text and began devouring the words, passing around the pages, trying — and failing —  to comprehend the dimensions of what we were reading. Nearly half our party were New Yorkers. Milt’s stepson, a San Francisco bond trader, had close ties to colleagues at Cantor Fitzgerald. 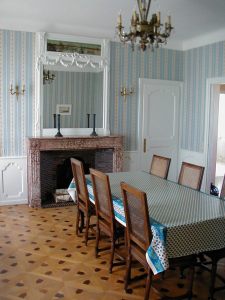 It was only after midnight, when my husband strung a wire across the top of a door for an antenna and attached it to a dinky clock radio, that we heard the first English language accounts of the day from the BBC.

Next morning, Le Monde was thoughtful enough to publish our first (and my permanent) images of the poor souls who jumped, mid-air. Trying for another approach, we piled into our cars to find a hotel with television in the rooms. One hotelier, not deceived by our French, let us all into his family’s private quarters where, crowded next to his dogs, we watched CNN report about American Flight 93’s crash and read the crawl with more names of more dead.  We thanked him, dried our eyes and left.

One dear pair in our group, long standing French travelers, knew and loved a small nearby town, so we all repaired to its greenness. And as the two of them took in the moment and we sat on logs and tailgates and such, my husband unexpectedly produced cheese, baguettes, thin sliced ham and wine. With cloth napkins and glasses. When he had gotten it, or where, I have no idea. All I remember is the beatitude of that meal, appearing, as always, without fuss, but with full knowledge of how much it was needed.